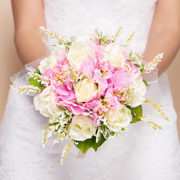 When you go to a wedding there are tons of traditions, have you ever wondered WHY though? Where did these traditions come from and why do we still do them today? Two of my favorite things are Weddings and History so this was interesting to me…hopefully it is to you too!

In a true case of celebrities dictating fashion…. Once Queen Victoria of England wore a White wedding dress at her wedding in 1840, that was the standard since.

The Veil and not seeing the bride on her wedding day.

In the times of arranged marriages, daughters were considered a commodity to their family. A marriage was a way of sealing agreements between families and increasing their assets. For an arranged marriage, the Bride and Groom would many times meet for the first time on their wedding day, at the alter! The Veil would keep the brides features obscure until after the ceremony was complete making it so the groom wouldn’t change his mind and backing out on the deal if he didn’t like what he saw.

Another theory of the origin of the veil was that the Bride attracted evil spirits to the ceremony. The veil was used to cover the brides face and hide and protect her from the evil spirits.

In Ancient times women carried aromatic bunches of garlic, herbs and spices to ward off evil spirit. As times progressed to modern day it has changed from carrying smelly stuff to just picking an arrangement that the bride likes or that matches the wedding theme.

Why would a bride want a bunch of other woman up there on her wedding day…. Because they are her BFF’s right?… well originally it was based on superstition. In the olden days there was a pretty big concern about evil spirits attacking peoples happiness and the origin of having bridesmaids is no different. In an attempt to confuse and distract evil spirits trying to ruin the brides happiness, the bride would have a few of her friends dress similar to her and stand near her and “take one for the team” if the spirits showed up to ruin her day.

In the era of arranged marriages the groom would choose his “Best man” who was traditionally would choose the strongest and most capable “fighter” he knew. Weddings at that time were more of a business transaction than a unity of love so he needed somebody that could help retrieve a runaway bride or fend off the brides irate family if they didn’t agree with the transaction. (And you thought having to give a speech was the hardest part of your responsibilities!)

The Ring bearer and why the rings are put on a pillow.

The ring bearer’s pillow symbolizes the promises of the dreams you have while sleeping, coming true. A small child is typically asked to carry the pillow which symbolizes innocence, the future and new beginnings.

Why is the wedding cake such a symbolic part of a wedding reception? The wedding cake has been a component of weddings since medieval times. Originally cakes were made of wheat which was a symbol of fertility and prosperity. As a relic of once performed fertility rites, these ‘wedding cakes’ would have been thrown at the bride. Maybe smashing cake in the bride’s face is supposed to make her more fertile? I wouldn’t recommend it! Modern cakes have turned into a 3-tiered extravaganza and the act of cutting the cake symbolizes your first act as a team and feeding the cake to each other is a symbol of the commitment you have to each other (might have some impact on trust too!)

Saving the top of the Cake

Everybody always saves the top of the cake … puts it in the freezer and then eats it a year later. Nobody knows why but everybody tells you to do it… turns out… The top layer of the wedding cake was traditionally saved by the Bride and Groom to be used at their future child’s christening, as it was expected that the bride would be with child within the first year.

This tradition originated in England and France. Guests would try to obtain a piece of the bride’s dress for good luck, which often left the bride nervous and tense throughout the entire ceremony in anticipation of her dress being ripped to shreds by the eager mob of wedding guests. To pacify the crowd and ease the bride’s mind, the groom began tossing out a piece of the bride’s wedding attire to distract the guests as the newlyweds made a quick escape from the reception.

Friday night wedding? DO IT!

The Most Important Aspect of your Wedding Day
Scroll to top