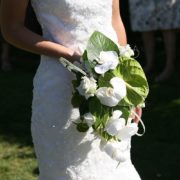 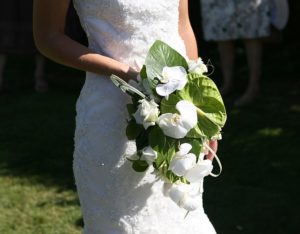 Superstition says that if the groom sees the bride in her wedding dress (or even at all!?) that it will bring bad luck to the marriage. Ever wonder where that superstition came from? During the time when arranged marriages were custom, the engaged couple weren’t allowed to see each other before the wedding… at ALL! The wedding symbolized a business deal between two families, and the father would have been pleased for his daughter to marry a man from a rich, land-owning family (oh how romantic! haha). BUT, he also feared that if the groom met his daughter before the wedding and thought she wasn’t attractive enough then would call off the wedding. Oh the shame that would have brought to the bride and her family. The idea of wearing a veil was for the same purpose, to conceal her identity for as long as possible, only to reveal her at the last possible moment when it was too late to back out.

Today, while arranged marriages are certainly not the norm, many couples still honor that tradition and if anything more for the excitement of getting to see your bride walk down the isle for that first time. Here is something to think about though… Wedding days have become so stressful! Why not eliminate stress wherever you can? A new trend that I have noticed is to do a “first look” session with your photographer. Before the ceremony, set things up with your photographer to capture that first moment that the groom see’s his bride. That takes a little bit of the pressure off… and the part I like the most… it allows the photographer to get a lot of the pictures of the bride and groom and the wedding party done BEFORE the ceremony. There have been times where I have been at the reception playing music for up to (sometimes over) two hours waiting for the bride and groom to arrive from taking pictures. If you could spend half of that time before hand and get them done?! That would certainly speed up the process and get everybody to the reception faster. Pictures are important for sure… but is that tradition that is based on arranged marriage, business transactions worth holding onto it? 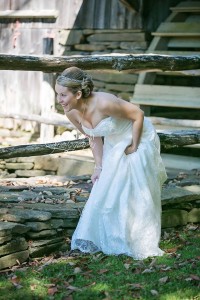 Pictures are from a wedding I did. Check out the photographer at http://www.lorileshphotography.com/ 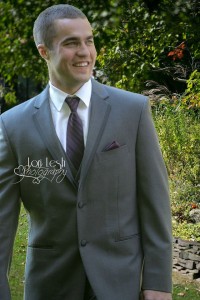 While we are on the subject of saving time… Let skip the receiving line too! Websites like theknot.com (Have I mentioned I hate that website?!) say “If you’re having more than 50 guests, its considered proper etiquette” to have a receiving line. Their line of thinking is that if you do a receiving line that will get the talking to your guests over with so you can just enjoy your reception. I can assure you with absolute certainty that even if you do have a receiving line.. you are STILL going to go table to table at your reception and say hello to those same people. Or, those same people are going to come up and talk to you throughout the course of the reception regardless if you went table to table or not. Websites like that give advice that in theory sounds logical, but as somebody that actually is at weddings every weekend, its just not the case. Receiving lines can take up to an hour! Just to have to talk to the same people once you get to the reception. My opinion, for whatever that is worth… save that hour of meet and greets for dancing at your reception!

The science behind your wedding Reception layout
Scroll to top